The show is hung and ready to go for the opening January 16th! Stop by between 6-8 or visit the gallery… The show dates are 1/16 – 3/11. Plenty of time to stop by! We will probably do a closing reception in March since Mary Jones cannot be here for the opening! Look for posts as we figure out a good date. dja 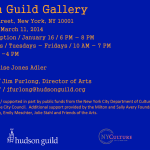 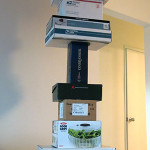 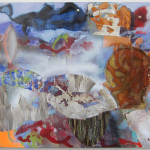 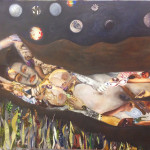 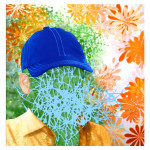 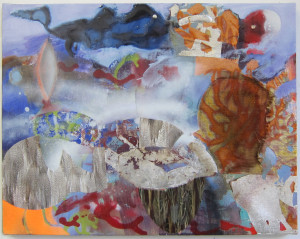 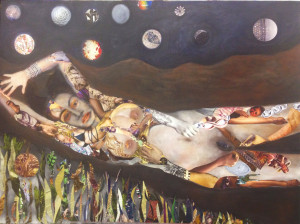 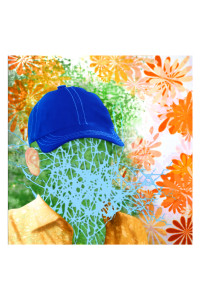 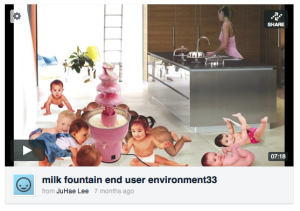 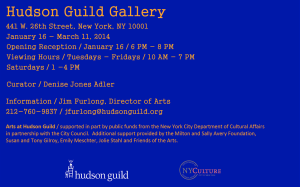 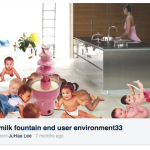 Cultural Guerrillas  will focus on how contemporary collage and mixed media artists use visual rhetoric as sensory expressions of alternative cultural meaning.  Ultimately they move beyond confining representations of the self to one that is not static but evolving, de-limiting and mobile.

Societal limitations by the dominant powers, keeps the status quo in check in ever increasing and sophisticated ways.  The pendulum swings forward but it also swings back, pulled in both directions by the forces and fears within human nature. With these commonalities in mind, the show was conceived as a 21st century observation of artists as foot soldiers fighting against the apathy and passivity which enable societal strictures to remain.

The seven artists participating represent a broad spectrum of age, race, and culture.  They all happen to be women. This, though not purposeful, is not surprising since the hierarchy particularly affects women. The work of all of the artists deconstructs the symbols that bombard us.  They are today’s cultural guerrillas.

Maren Hassinger began making sculptures and performances in Los Angeles in the 1970’s.  Now based in New York, Hassinger continues working with large scale installations, performance and video which address themes of nature, consumption and identity.  She has mounted many solo exhibitions and participated in more than 120 group shows.

Mary Jones, originally from North Carolina, has a BFA and MFA from the University of Colorado, Boulder. Her recent one-person exhibitions include Studio 7D, NYC, Jancar Gallery in Los Angeles and her recent group exhibitions include “Nature Doesn’t Knock,” at the The George Gallery in California, and “Haywire,” at Storefront in Brooklyn, Sue Scott Gallery in NYC, and Michael Steinberg Fine Arts in NYC.

Khia Poitier is an up and coming artist and designer hailing from Nassau, Bahamas. She is currently a senior at the Rhode Island School of Design where she is majoring in Illustration. She has been featured in numerous exhibitions and was one of three recipients of the Popopstudios Junior Residency Prize in 2010.

Tamara Staser-Meltzer was born and raised in Lansing, MI.  Recently her work was shown in the (BWAC) Brooklyn Waterfront Artists Coalition’s “Color” juried by Brooke Kamin Rapaport. She was chosen to be part of the 2013 BAYVAN (Bay Area Visual Arts Network) and exhibited in San Francisco, Los Angeles, Chicago, Detroit, Brooklyn and New York.

Carla Gannis, who lives and works in Brooklyn, holds an MFA in painting from Boston University and is the recipient of several awards, including a 2005 New York Foundation for the Arts (NYFA) Grant in Computer Arts.  Most recently she collaborated with poet Justin Petropoulos on a transmedia book, installation and net art project entitled <legend>   <legend>  (Jaded Ibis Press, 2013).

DuDu Juhae Lee was born in Incheon, South Korea and grew up in Guatemala City.  She is a graduate of Rhode Island School of Design.  Lee created BabyNurture, a baby product company to highlight the manipulation techniques used in product marketing campaigns in order to perpetuate needless consumerism and to question the ways we perceive ourselves.

We establish our identities with the art we consume. Technology, social media, and escalating globalization have altered the relationship of the individual to the collective, and the boundaries of self to the other.

Counter-cultural movements like in the 1960's and 90's focused on the self as it is defined by the limitations and the preconceptions within insular societies. "Cultural Guerrillas" will focus on how contemporary collage and mixed media artists use visual rhetoric as sensory expressions of alternative cultural meaning. Ultimately they move beyond confining representations of the self to one that is not static but evolving de-limiting and mobile.